To commemorate the anniversary of Our Order's founding, the men of Capital Lodge No. 23 gathered at Austin's historic Oakwood Cemetery where a small section is dedicated to local Odd Fellows—and other brothers and Rebekah sisters from Austin's earliest days rest throughout, in family plots.

Last year our Secretary, Brother Donald Rupert, found deeds to several plots in the historic cemetery, located just east of downtown Austin with impressive views of the Capitol. Noble Grand Israel Freeland began further researching this asset, and with the aid of the Cemetery Association was able to identify the occupants of our graves—including five unmarked plots.

Oakwood is the oldest “City” cemetery in Austin, dating from the mid-1850s. It was added to the National Register of Historic Places in 1985. Notable Texans buried in Oakwood include Susanna Dickinson (Alamo survivor), Governors Elisha Pease and James Hogg, and the Governor's unfortunately named daughter, Ima Hogg. The view of the Capitol is one of the statutory “Capitol View Corridors”—meaning downtown buildings are prohibited by State law from obstructing the view from the cemetery.

There are a total of ten graves. The earliest dates from 1915, and is marked with a Civil War Veteran marker. Most of the burials are from the 1930s. The last burial is in 1978. Brother J.D. Latta's inscription shows he was an Odd Fellow for 30 years—and, indeed, his name appears on the 1964 cornerstone of our Lodge as Secretary.

We gathered on Tuesday, April 24, 2018, to perform the Ceremony for Decorating the Graves of Deceased Members. Pictured are Past Grand Jim Letchworth, Financial Secretary Donald Rupert, Right Support to Noble Grand Keith Crippen (Past Grand), Warden Shawn Lennartson, Noble Grand Israel Freeland, Vice Grand Justin Schneider, and Chaplain Joseph Honett. The Noble Grand, Chaplain, and the Recording Secretary, Arro Smith, performed the ceremony, with the Vice Grand marking the graves with memorial IOOF flags as each deceased brother was recognized by the Secretary. The ceremony includes the following descriptions to use at each grave:

“Lives of great men all remind us

We can make our lives sublime,

And, departing, leave behind us

Footprints on the sand of time.”

“There is no death! The stars go down,

To rise upon some fairer shore,

And bright in heaven's jeweled crown

Our Lodge has rededicated ourselves to maintain this section of the historic cemetery. We are working with a non-profit organization that advocates for Austin's oldest cemeteries, as well as the City's representatives.

Eight empty plots remain in our section of Oakwood—so our current brothers are placing dibs, though none are anxious for a permanent relocation to this prized piece of Austin real estate. 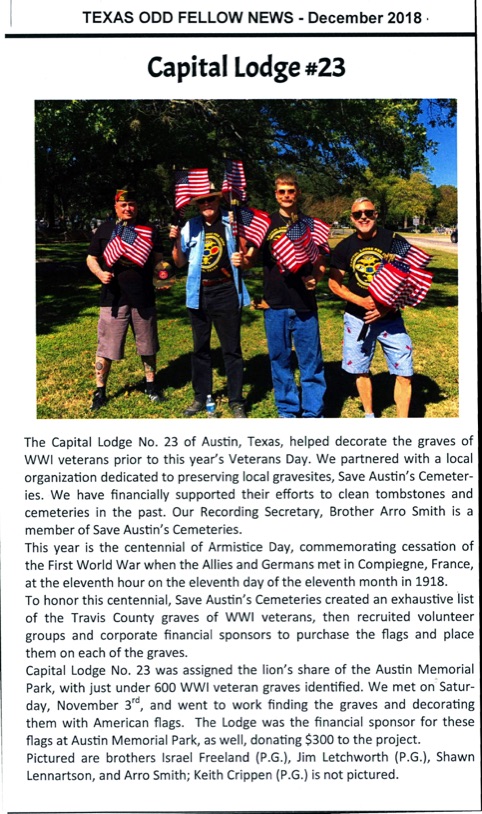 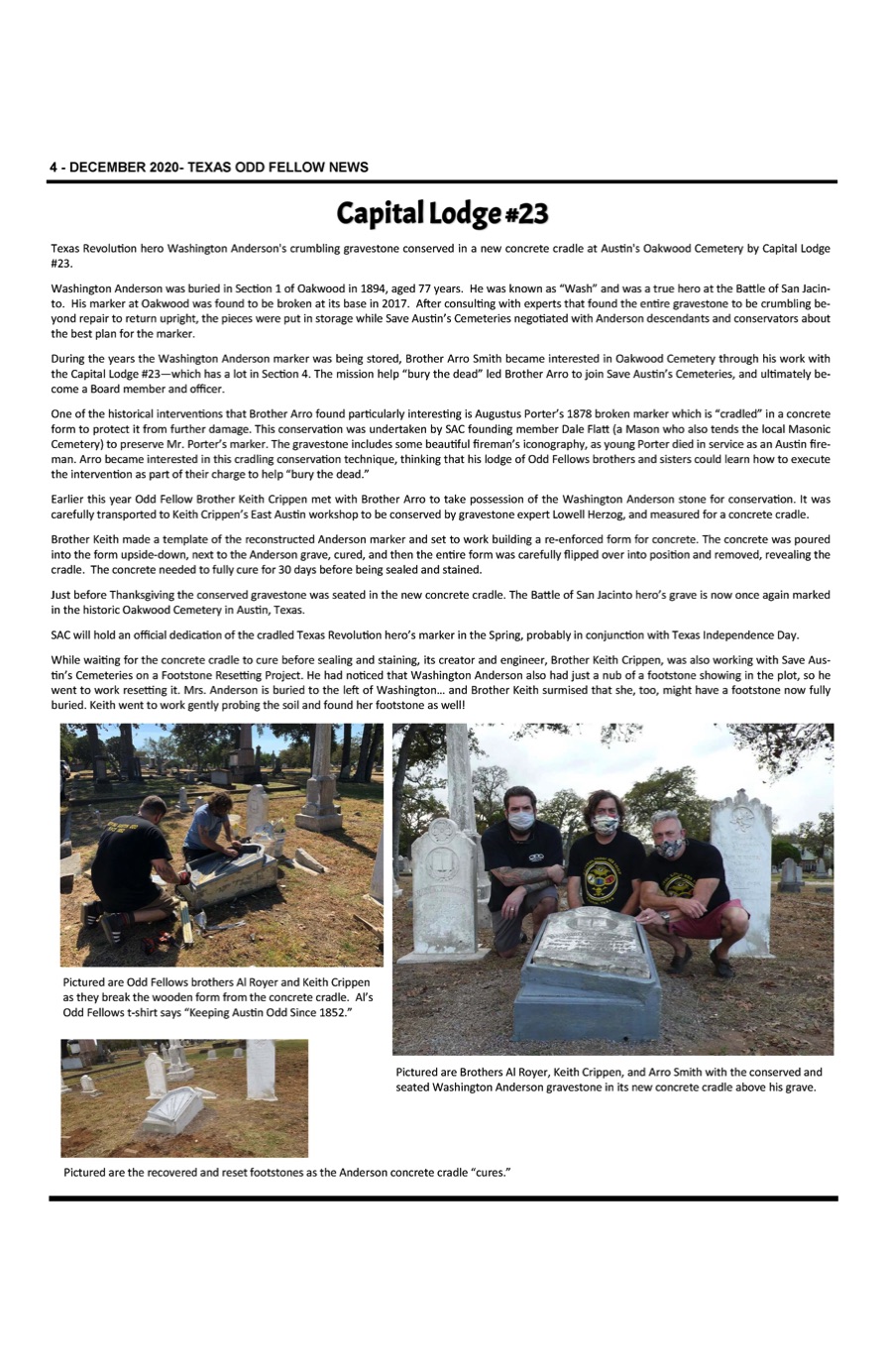